Museums between revolution and war

While planning my visit to the National Museum of Ukrainian History during my recent stay in Kiev, I searched the internet for opening hours and clicked on the Lonely Planet article about the institution. It says: “This huge museum has been fully modernized in recent years”.

Well, that does not quite fit the facts.

The last time I visited the museum was four and a half years ago. A few days earlier, Viktor Yanukovych had declared that he would not sign the association agreement with the European Union, triggering nationwide protests. As I climbed up the steps to the museum, a demonstration of students moved through Andriyivskyy Descent, many waving EU flags, some had drawn yellow stars on blue-painted cheeks. Now I was curious about how the museum presented itself four years after the Euromaidan. It was astounding: while the city outside had changed significantly, it seemed to me that time had stood still behind the heavy portal of the monumental house.

Of course: The installation in the stairwell, where a rain of shells and bomb splinters falls from the ceiling, reminds of the war that is still raging in the east of Ukraine. And on the third floor, visitors walk through a tent of the Maidan activists. But most rooms do not seem to have changed – at least in terms of how the objects are presented and which were selected. Especially remarkable is a large number of medals, sabers and pistols in the vitrines. But what does a room full of weapons explain about the Cossack’s culture and their importance in Ukrainian history? If you look at the museum’s website as a follow-up, you won’t find out more about it either: the virtual tour shows an excerpt from a movie in which a horde of Cossacks, some of them with tobacco pipes in their mouths, steps broad-legged into battle. Wouldn’t it be up to a museum to question such representations instead of presenting them as historical documents? 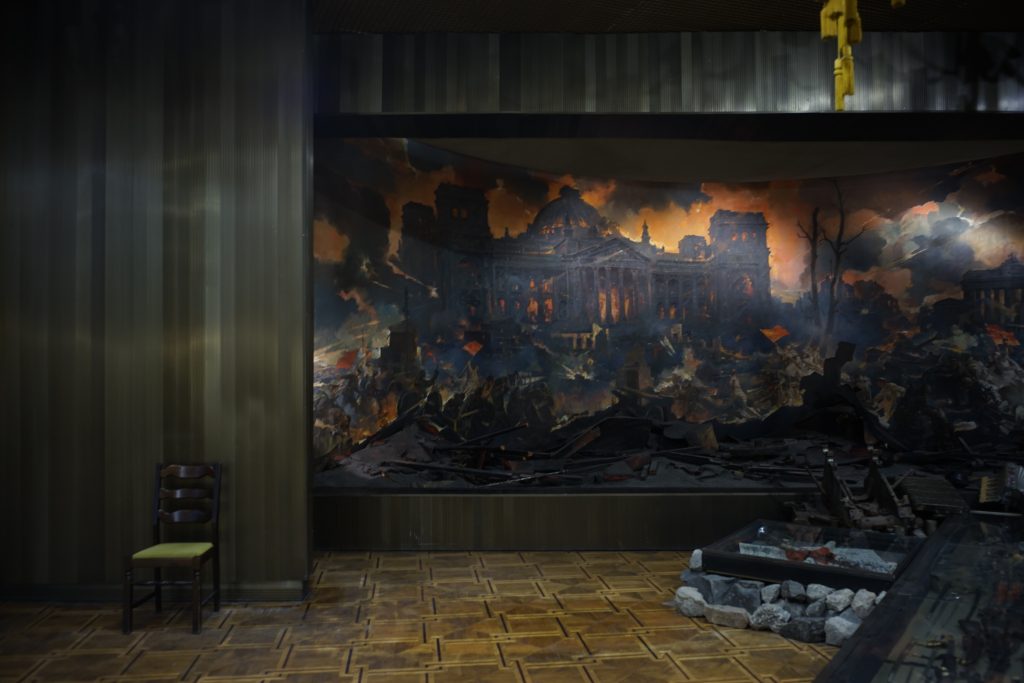 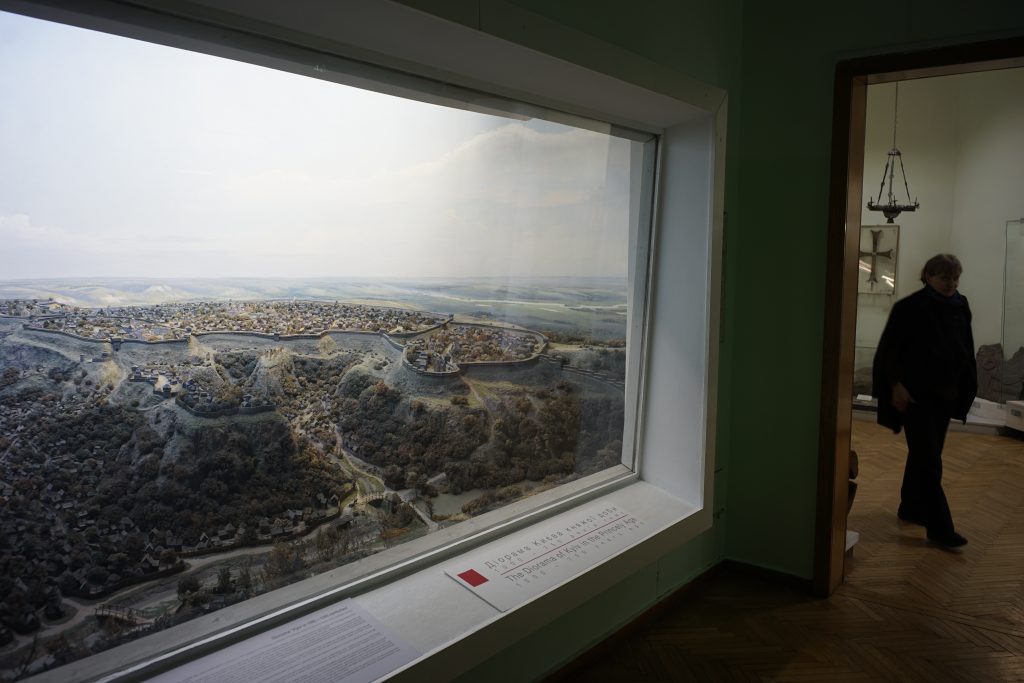 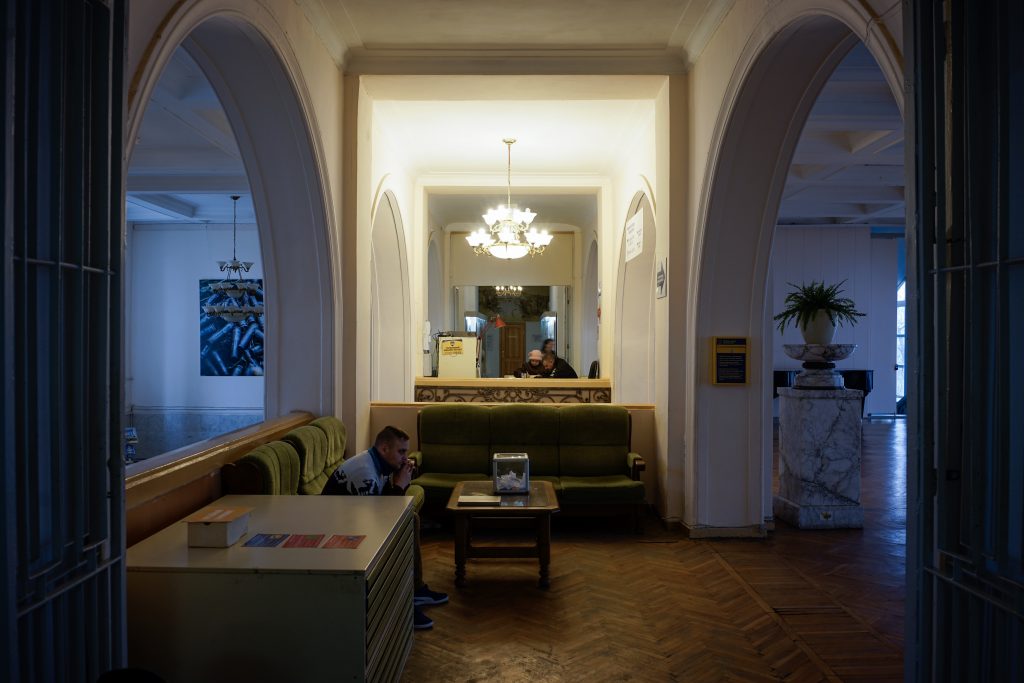 The museum of the Second World War seems to have fallen out of time in another way. Here, too, there are tiresome numbers of awards (one would rather like to learn more personal stories about the soldiers), but the rest of the exposition is dominated by a scenography aiming at overwhelming the visitors. Although the permanent exhibition was created after Ukraine’s independence, its visual language remains therefore somewhat late Soviet at times – especially in the first hall, where visitors are greeted by a pyramid of dozens of rusty Wehrmacht helmets piled up in front of a copper relief depicting the Red Army’s heroic struggle in the style of socialist realism. 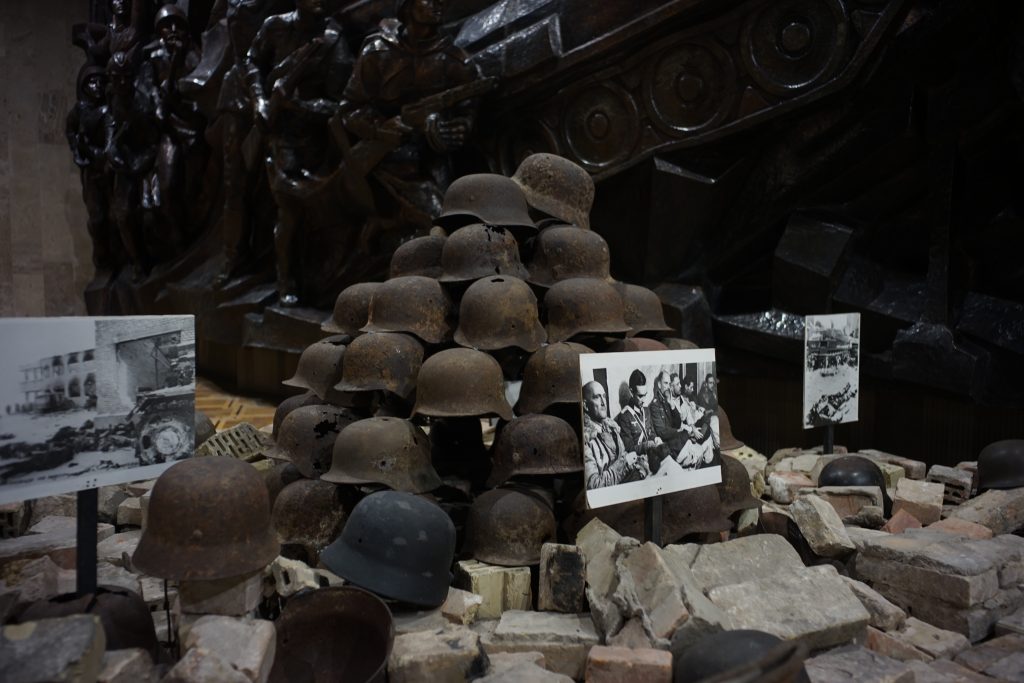 And although the exhibition deals with many of the once “white spots” of the history of the Second World War and also presents letters and diaries (which, however, remain unreadable and thus silent for most visitors), the presentation seems unbalanced. Especially since some topics such as the mass murder of the Ukrainian Jews by the German occupiers are treated strikingly briefly and controversial topics such as the ethnic conflict between Ukrainians and Poles in Volynia with its numerous massacres are completely ignored. “Re-exposition is still to come”, can be read on the museum’s website regarding the permanent display. I am looking forward to my next visit in another four years.

The Culture Mirrors cultural journalism residence project is realized with the support of Culture Bridges program financed by the European Union and implemented by the BRITISH Council in Ukraine in partnership with European Union National Institutes for Culture (EUNIC).